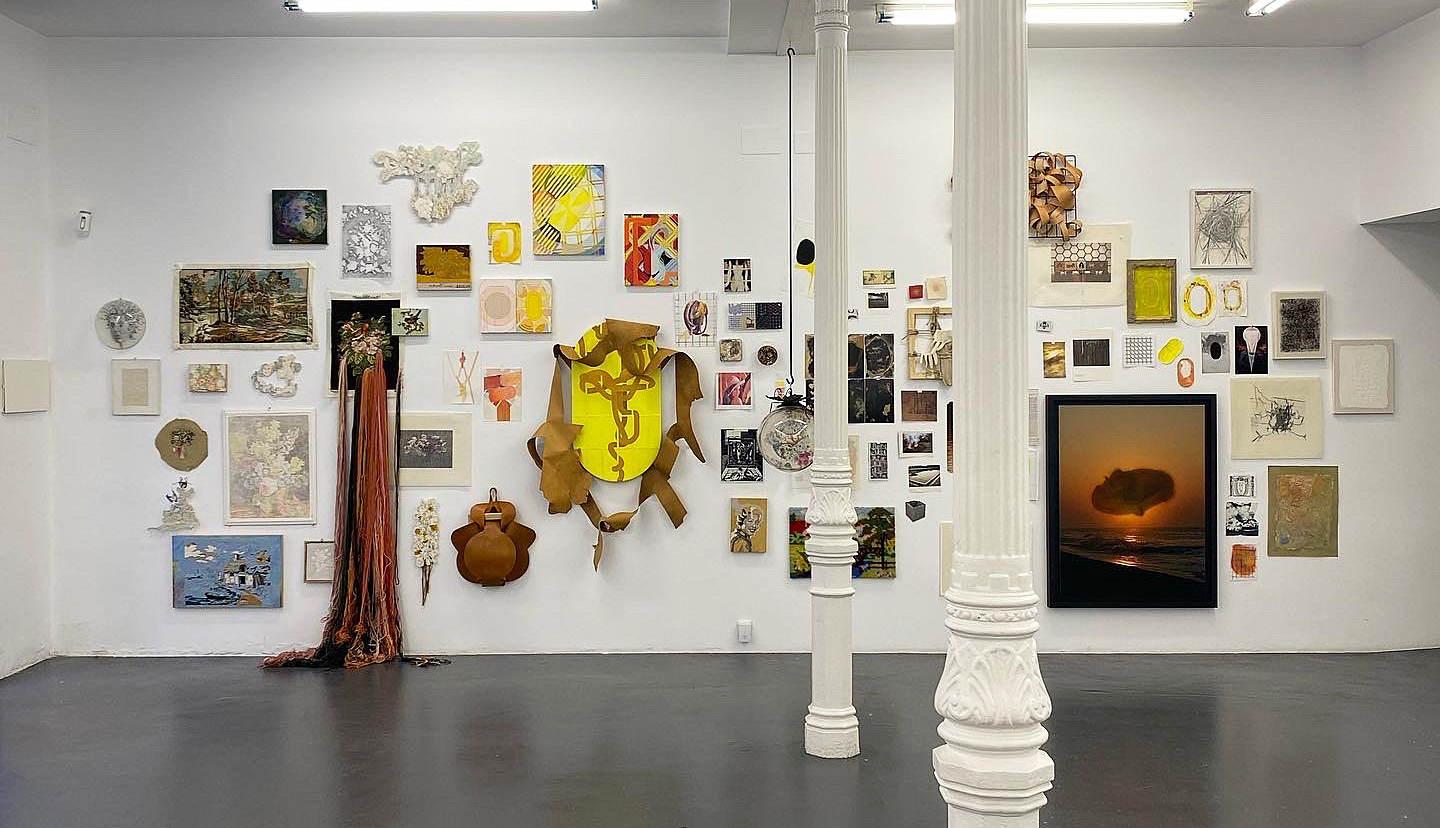 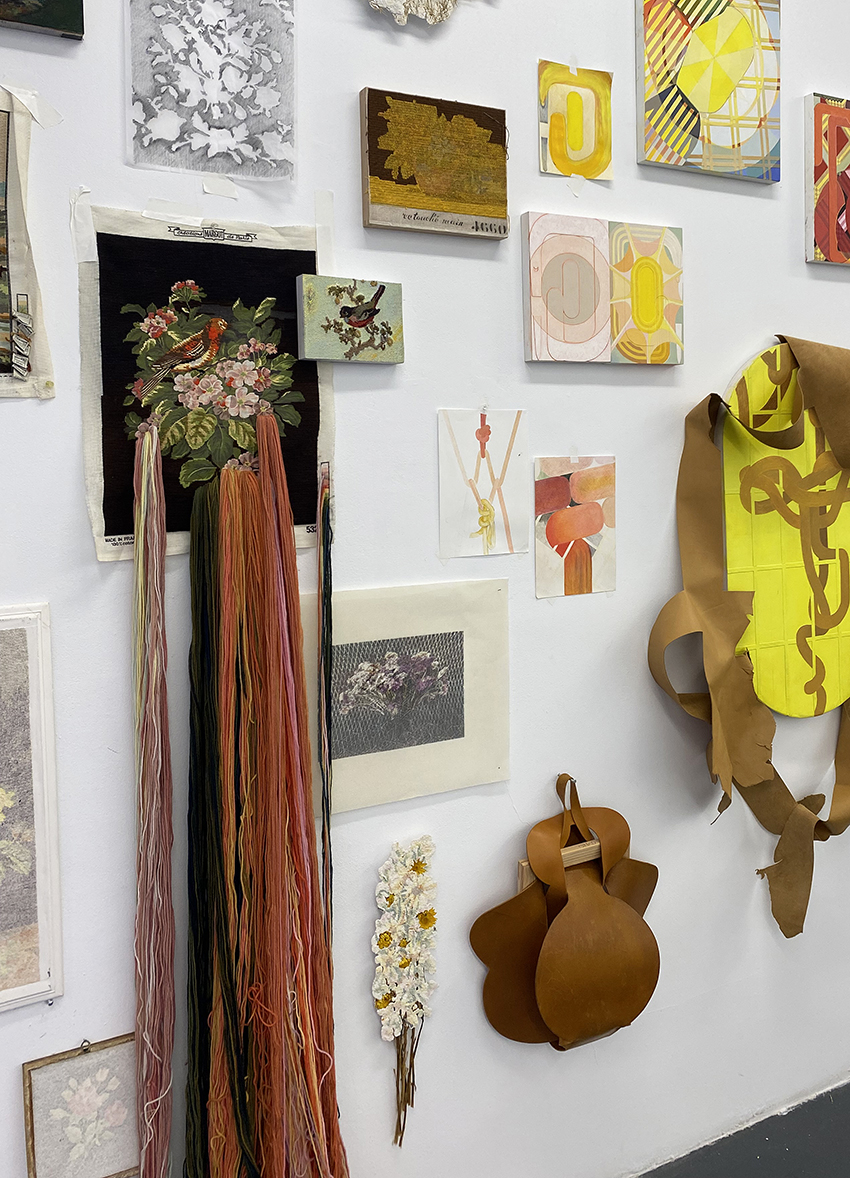 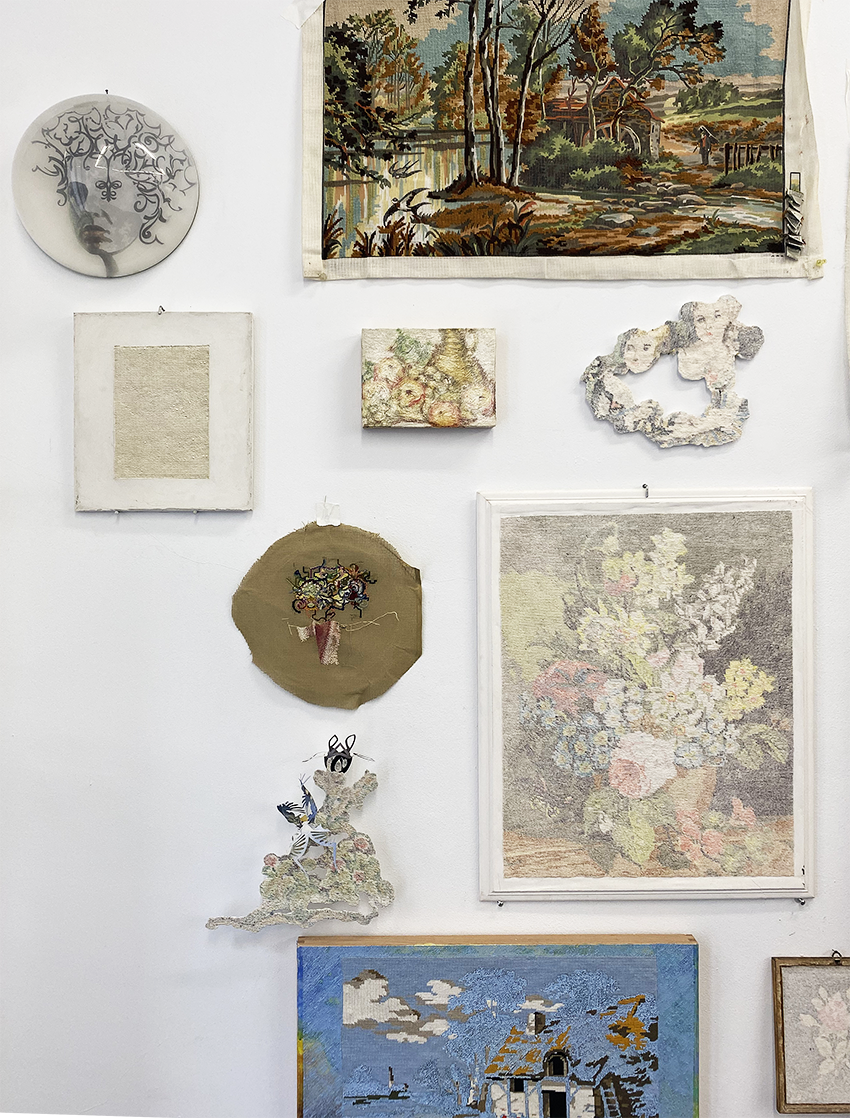 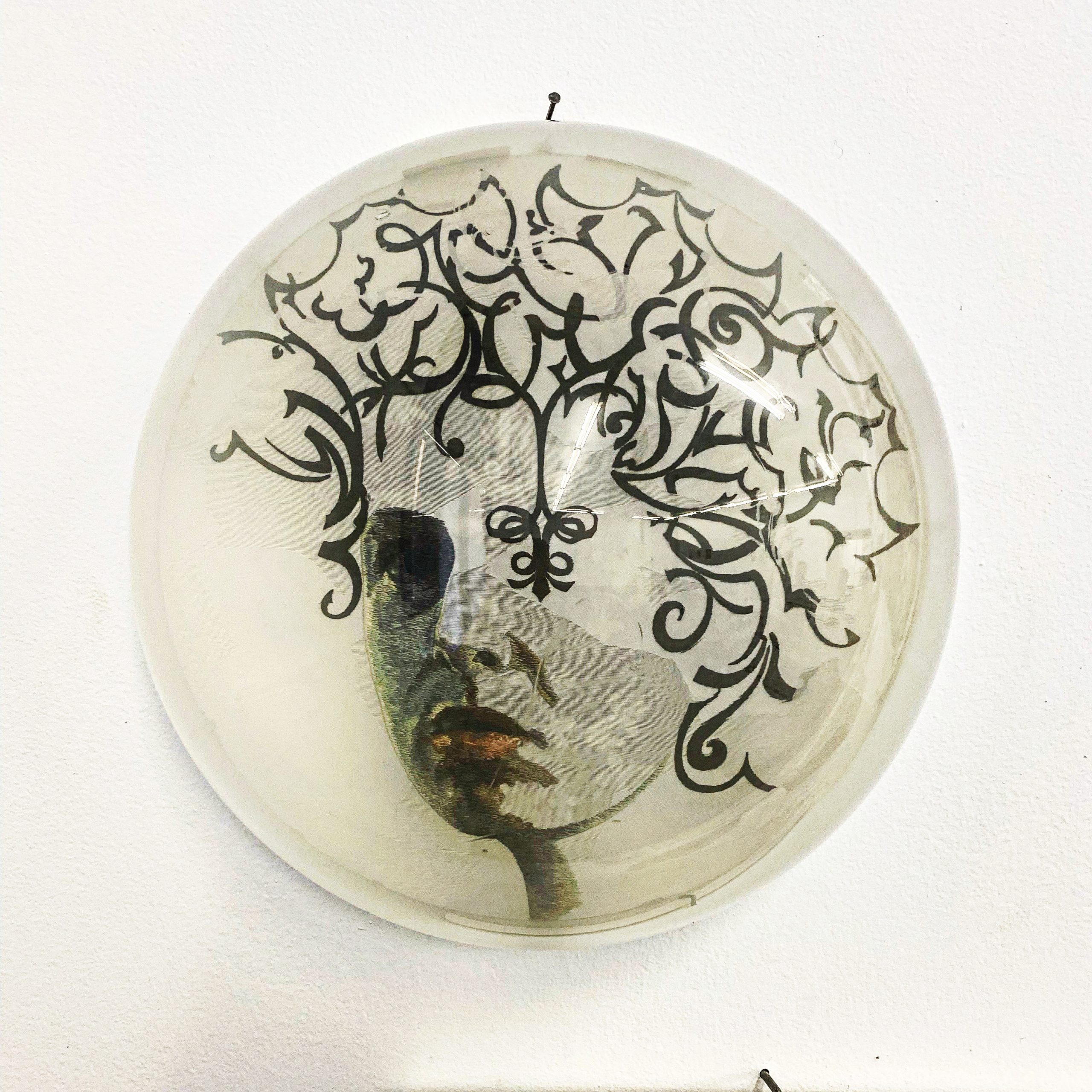 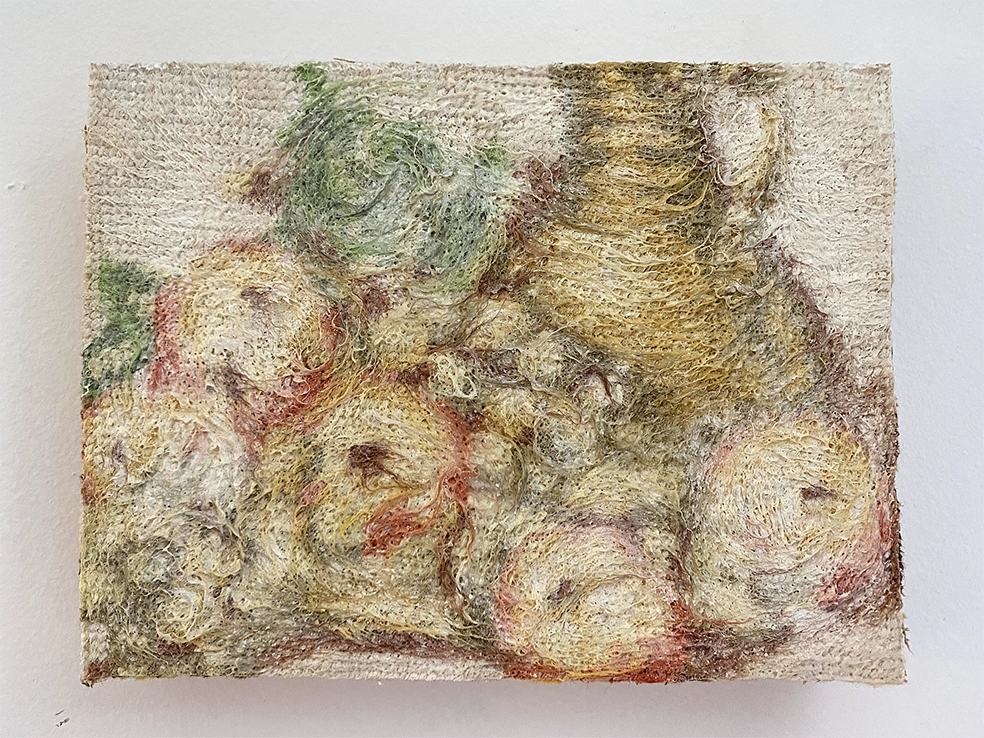 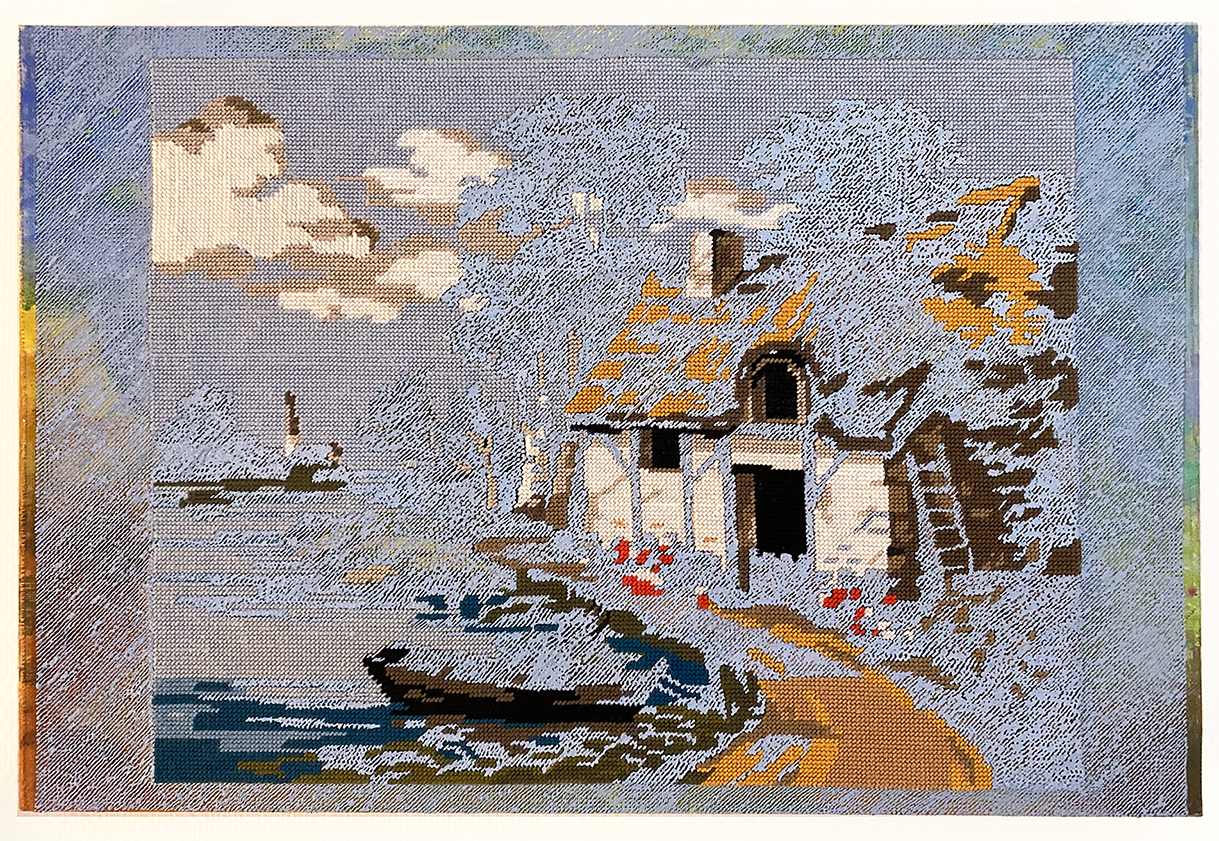 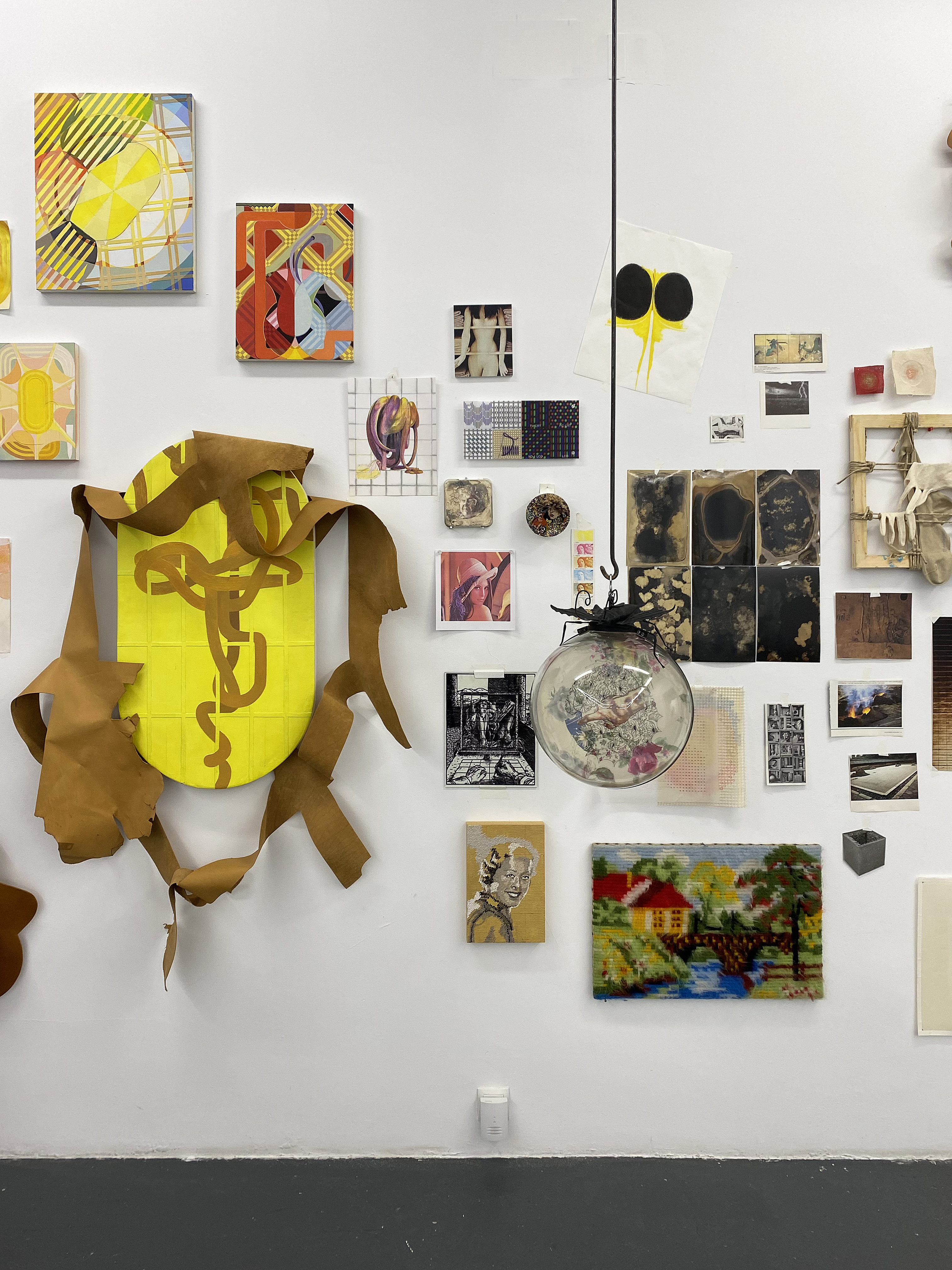 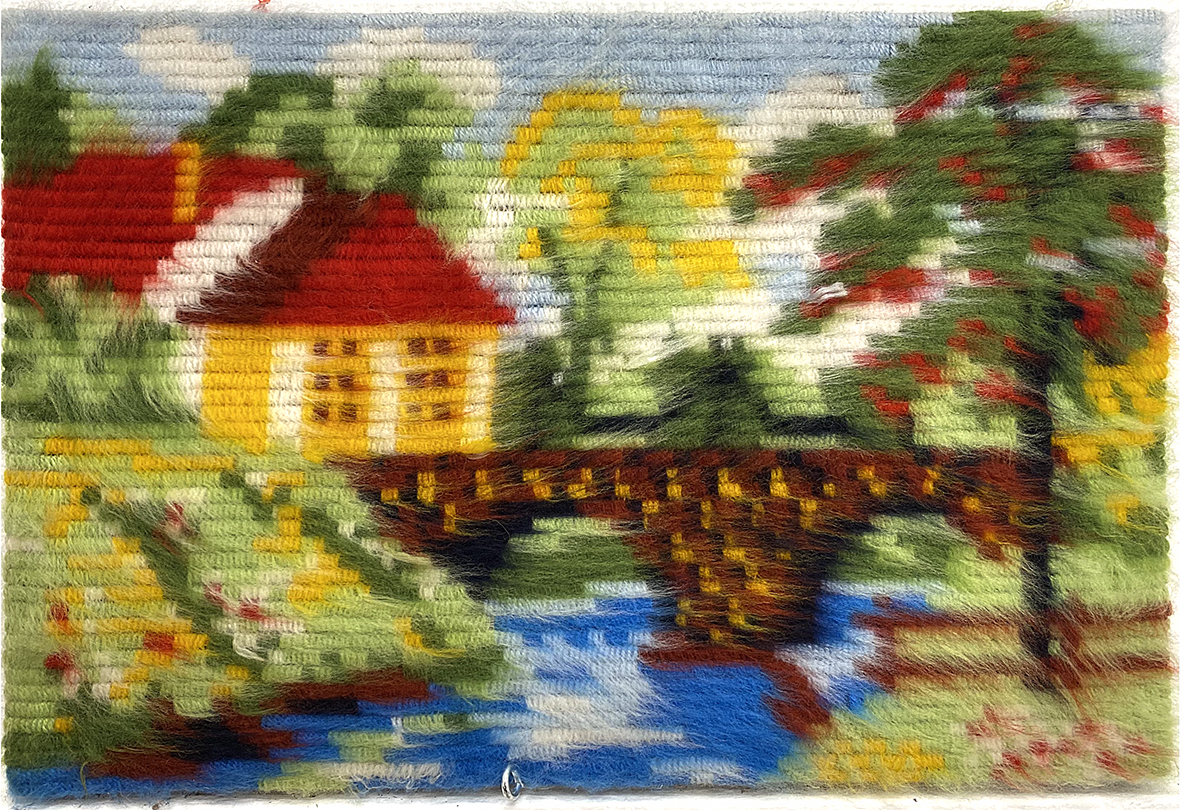 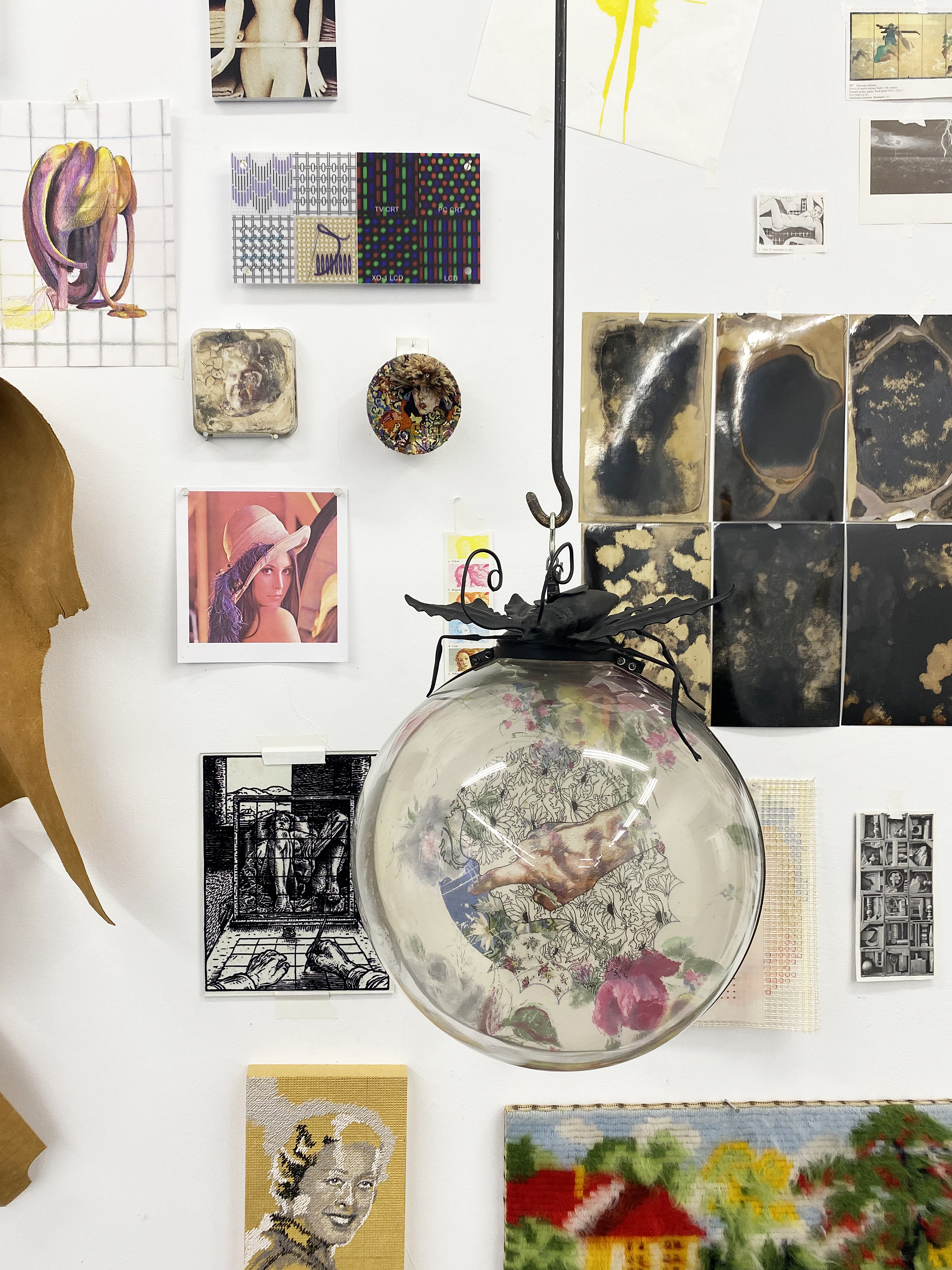 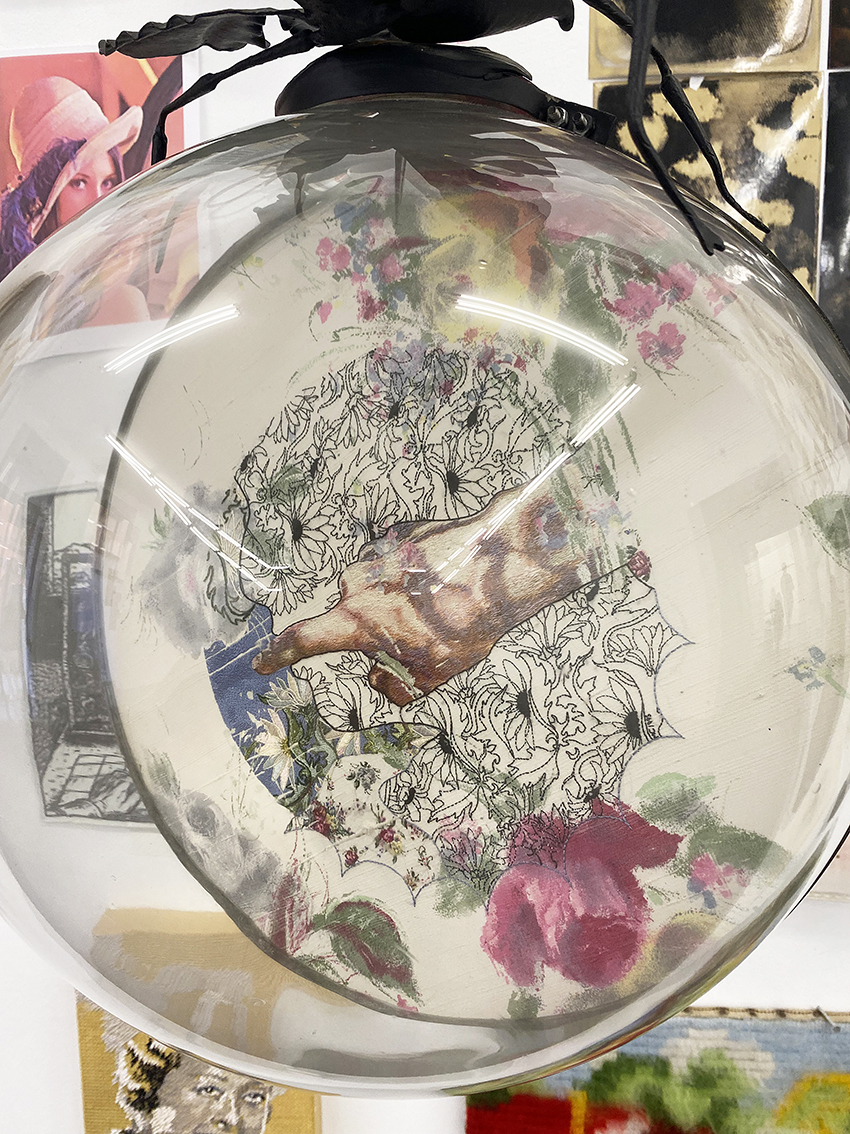 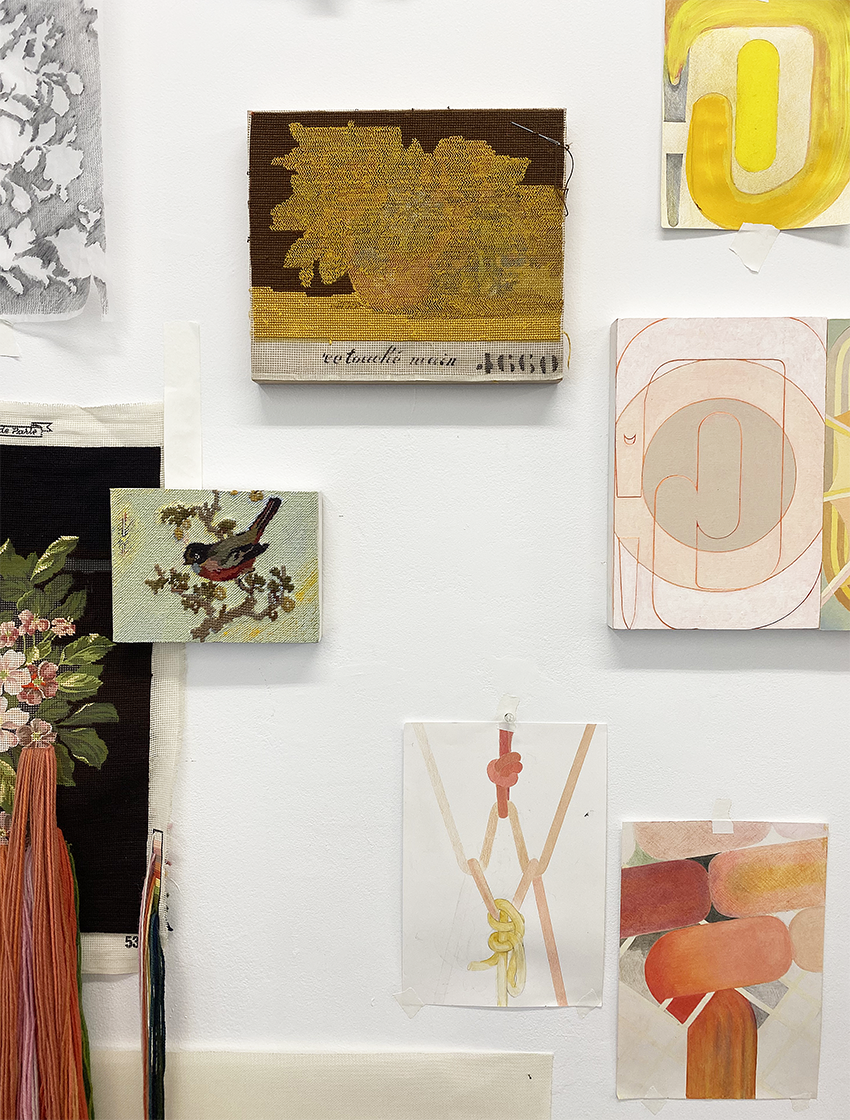 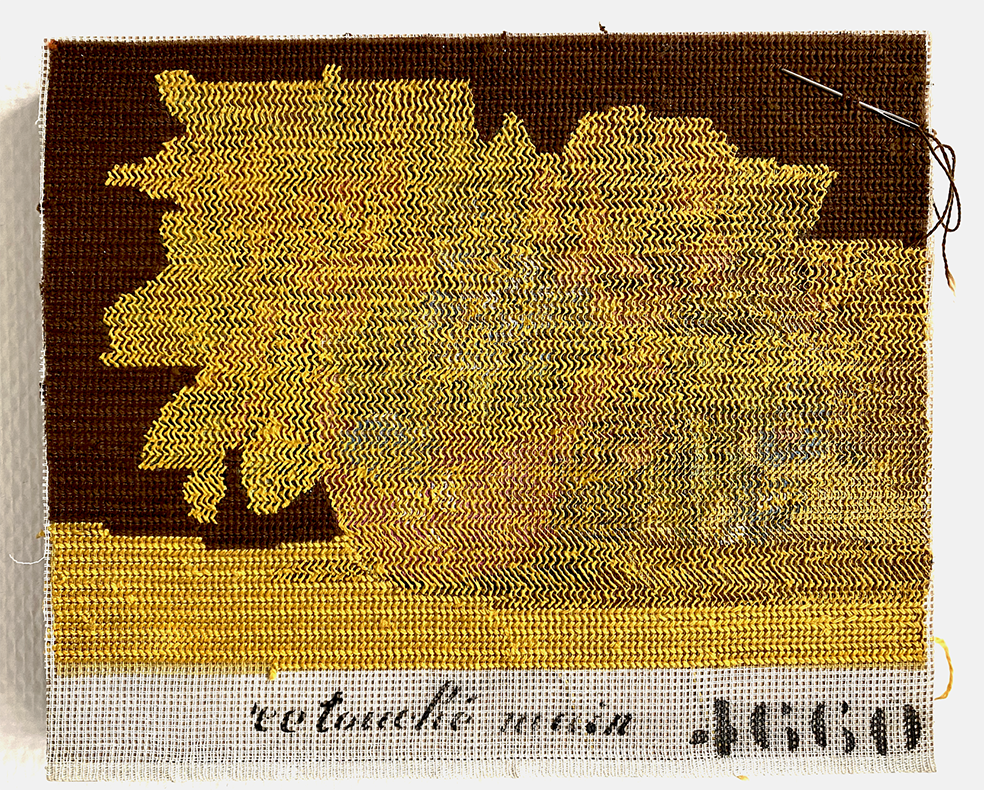 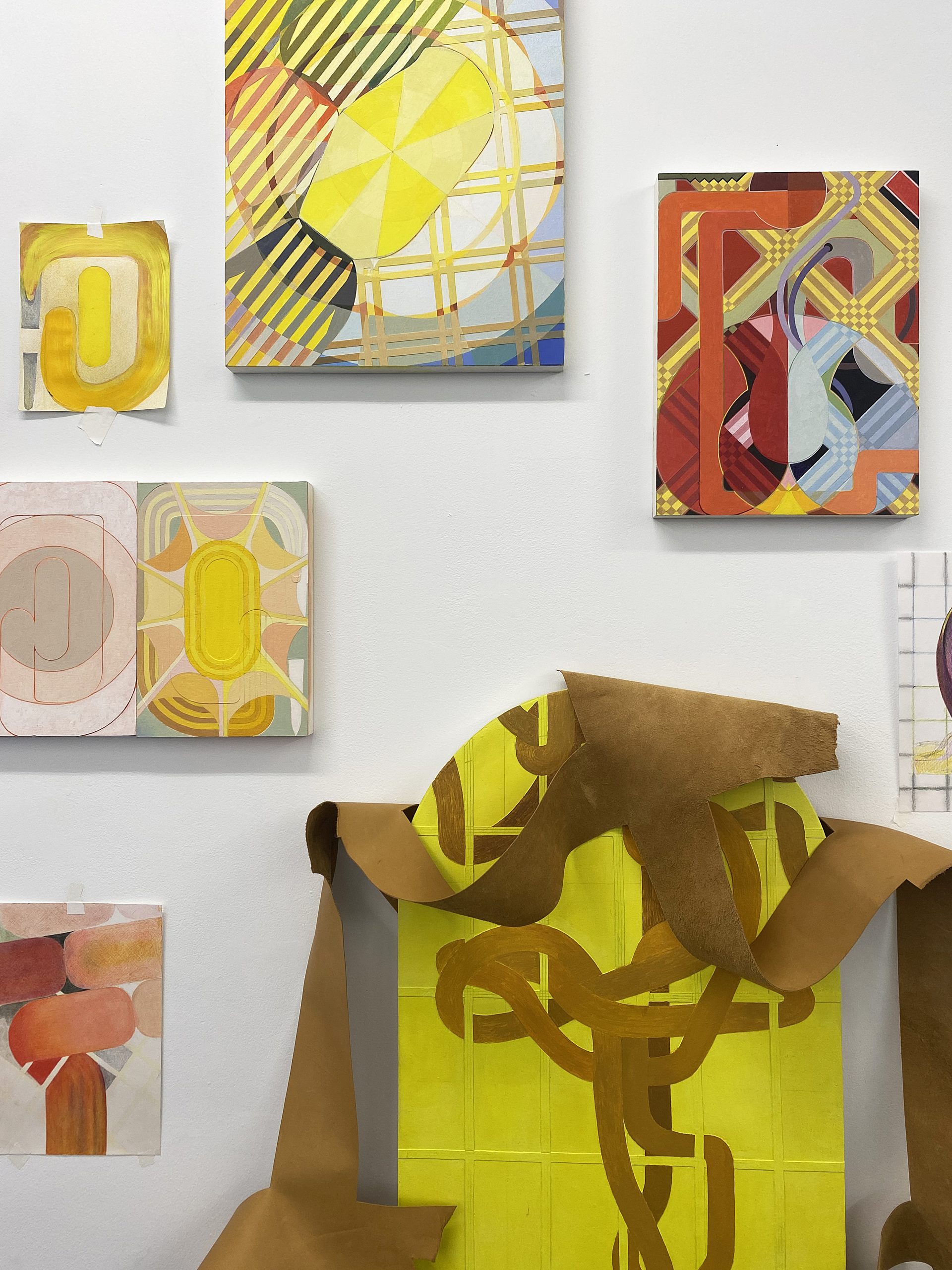 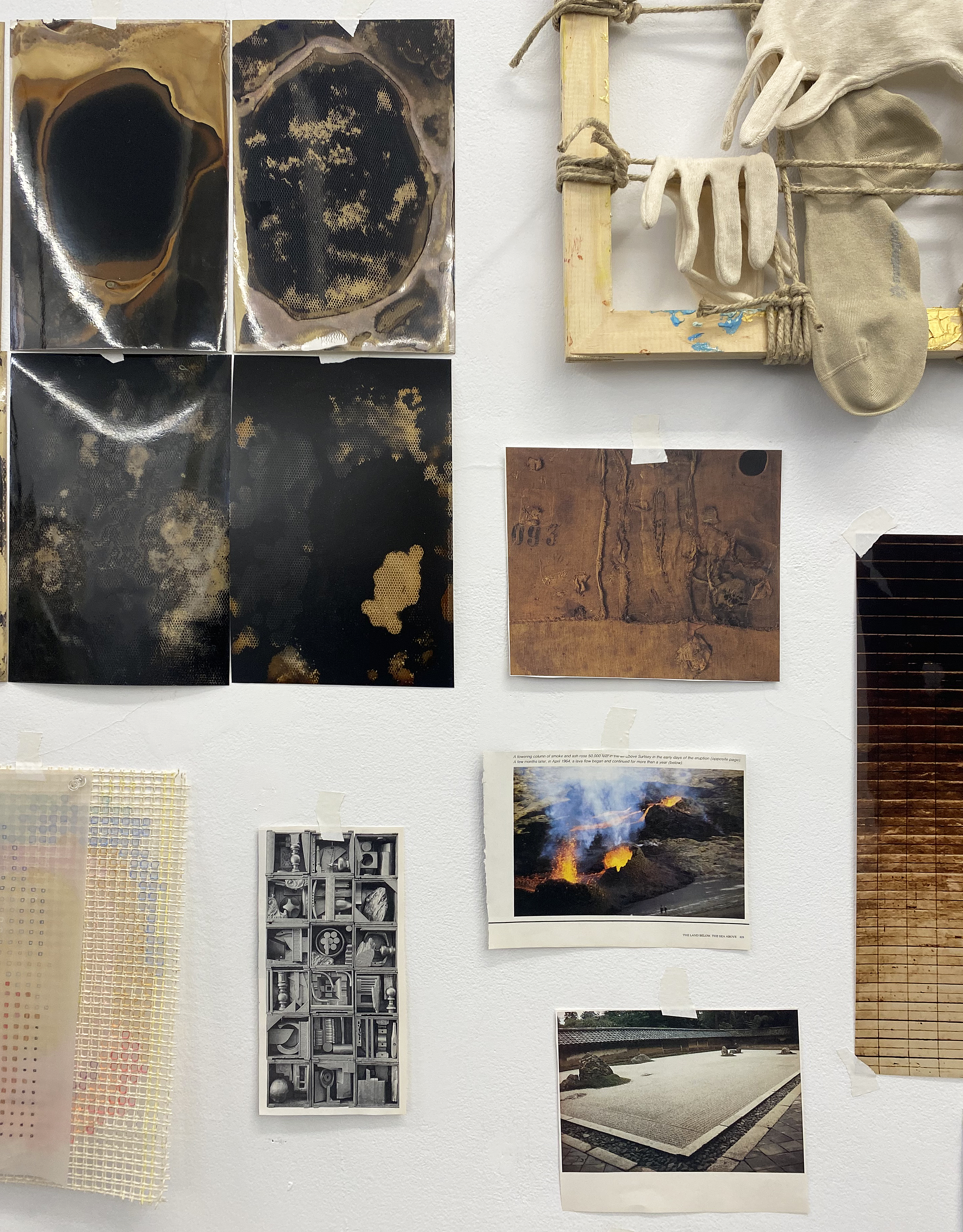 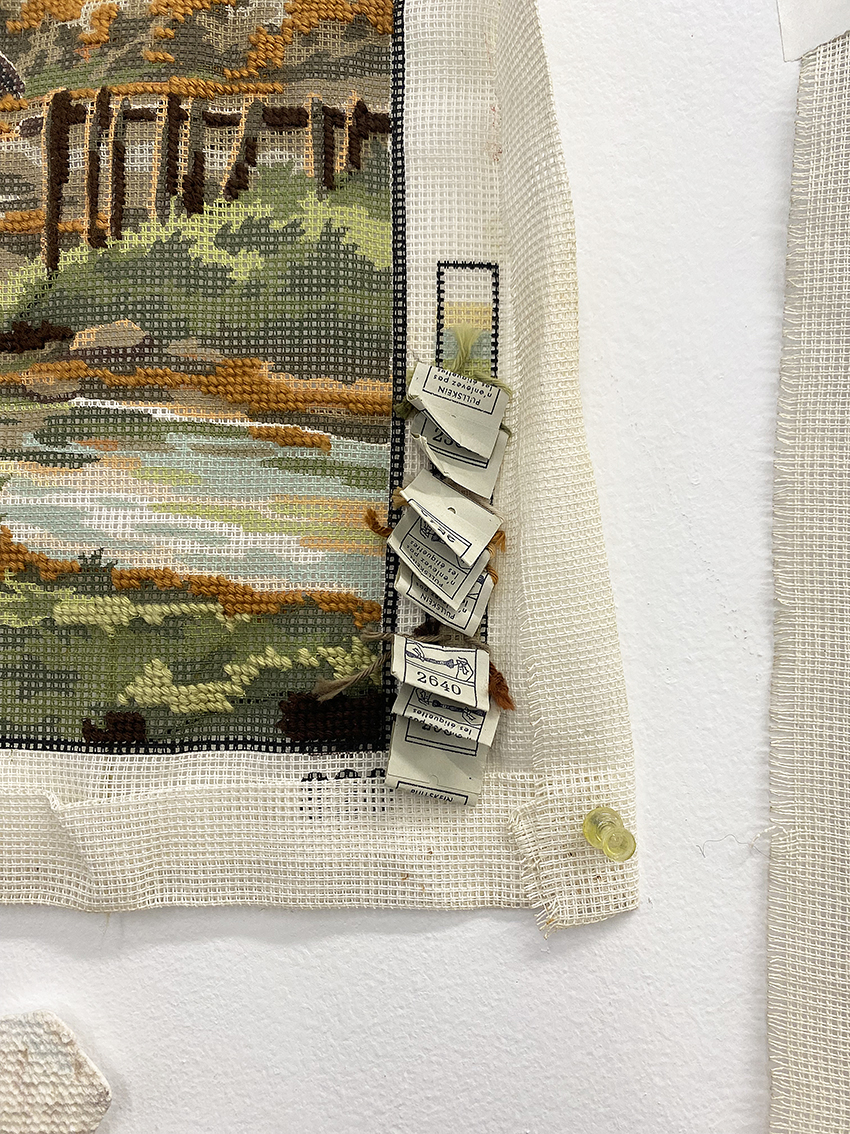 Maggie Cardelús moved to Paris in 2013 and shortly thereafter began collecting needlepoint canvases, both finished an unfinished, from Parisian flea-markets and online marketplaces, beginning a journey of rich exploration lasting several years that led to the Meshworks pieces using mesh and paint. The process leading to these works is loosely documented throughout the exhibition and particularly on the Process Wall. It involves years of research and experiments involving needlepoint, dead ends, tantalizing possibilities, pauses and accelerations, a rethinking of certain artists and writers, and a reframing of her own, past work.

The invention of needlepoint in the early 19th century systematized and democratized the previously more skill-based activity of embroidery with affordable “kits” of restricted colors and instructions which involved counting stitches that followed a gridded drawing. These later evolved into the still-popular technique of needlepointing images printed directly onto gridded mesh. As with all other forms of industrial production, programming guided an embroiderer’s decisions, suppressing the need for any significant inventiveness on the part of the maker.

This new image-producing technique was as highly innovative and exciting as pixelated, digital screens are for contemporary audiences. Though 150 years separate the needlepoint mesh from the digital screen, they both exhibit the fundamental, cultural techniques of overlaying surfaces at any scale with mathematically regular fixed points and orthogonal lines, assuming there is empty space that not only exists, but exists to be filled. One could say that the gridded surface is one of the most significant cultural techniques that has ushered in the modern era.

For the Meshworks in mesh and paint, Cardelús merges printmaking techniques with those of painting and needlepoint to critically engage with the forces of the grid. Calling upon silkscreen techniques, she relies on the mesh’s membrane-like characteristics of porosity and structural strength to determine the work. She then pushes the paint through the mesh from behind, allowing it to erupt through and reconfigure at will, building out like geological or biological processes into three-dimensions on the other side. The paint and screen material dynamics yield to viscosity and gravity while they engage with the printmaking techniques of reversal, layering and pressure.

Cardelus explains that working in reverse, from behind the screen, she is coaxing cogent form out of the chaotic grid, conjuring the naturally dynamic energies of volcanic eruptions, cloud formation, and childbirth. For the Meshworks in only mesh, Cardelús pulls apart and reweaves the needlepoint/rug mesh into forms that replace ordering principles such as separation and distinction.

For the Meshworks,, Cardelús depends on the grid while she grapples with its tensions and paradoxes, its freedom and authority. What is at stake, she believes, is the condition for the possibility of self-knowledge through the experience of bodily concert with matter. Tim Ingold writes, and Cardelús concurs, “It is precisely where the reach of the imagination meets the friction of materials, or where the forces of ambition rub up against the rough edges of the world, that human life is lived.” Through processes of engagement, collaboration, and dialogue with her materials, Cardelús relies on haptics with her hand to run up against their qualities—or questions. She responds with a series of possible answers, bringing to bear the materialization of intimate geologies, richly-coloured, mystical landscapes, psychic cosmos, and symbolic form.