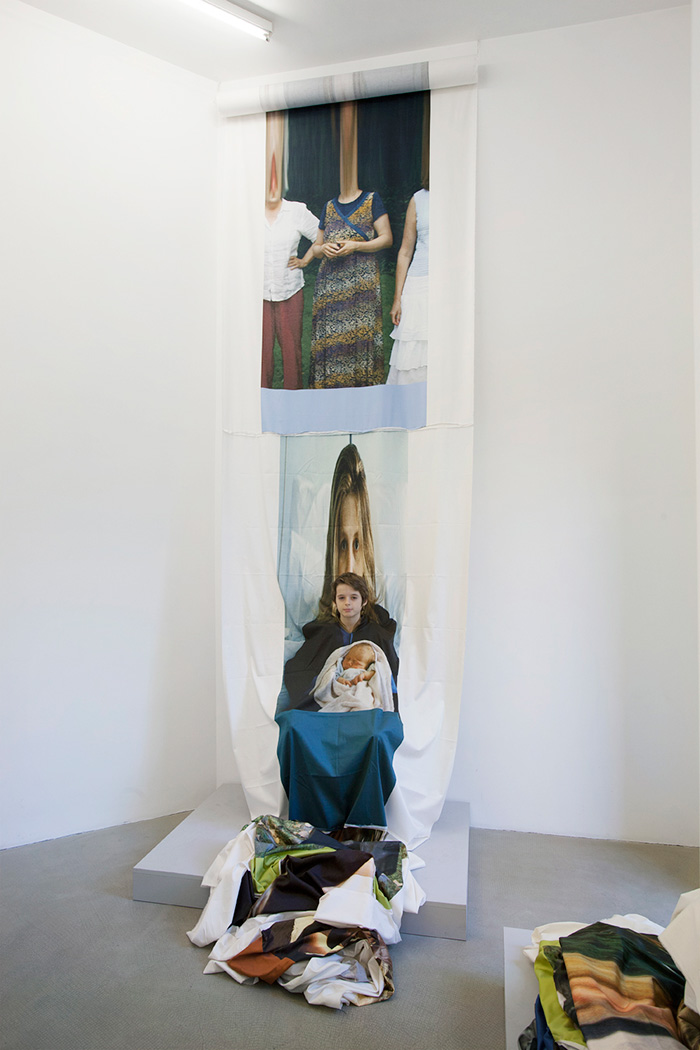 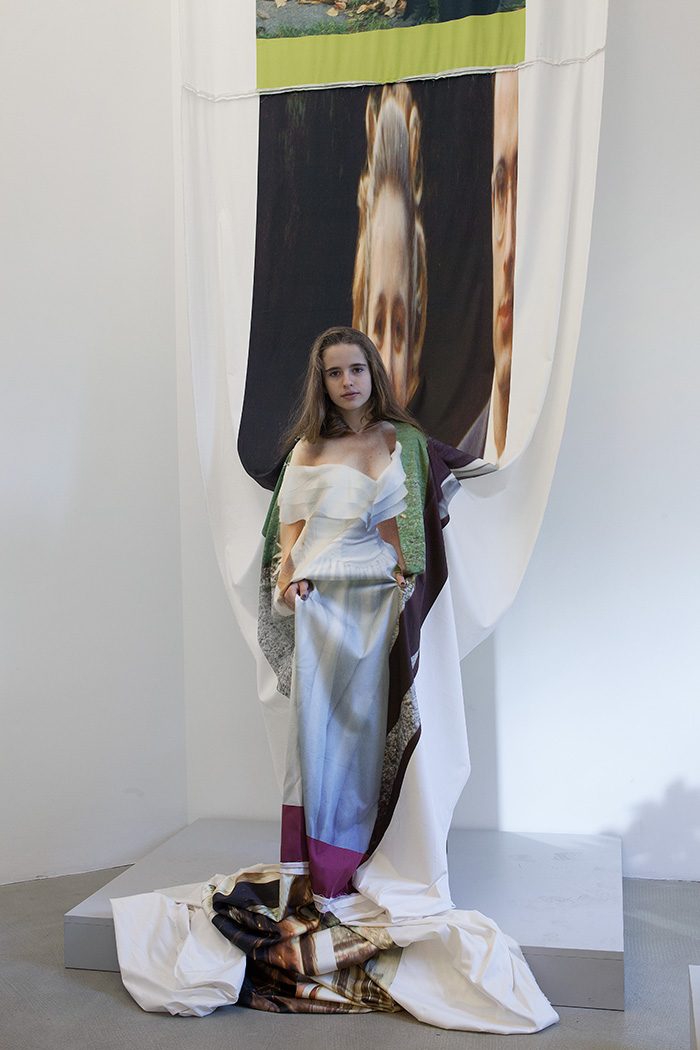 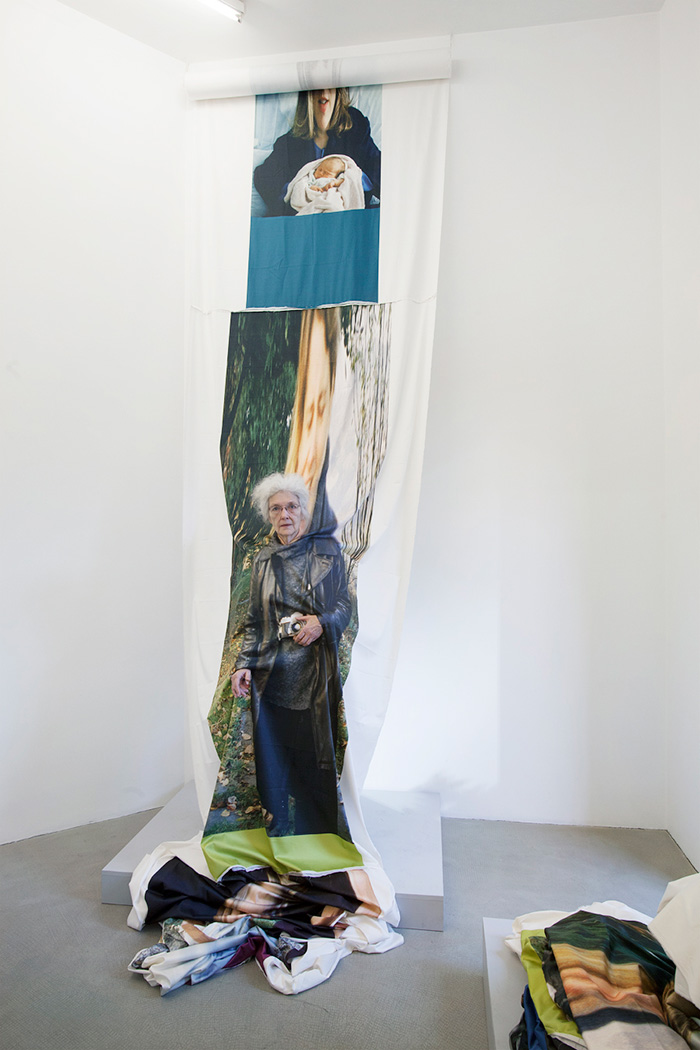 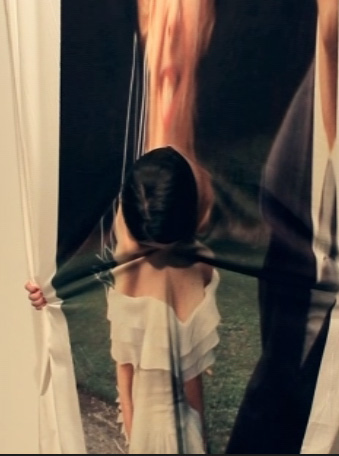 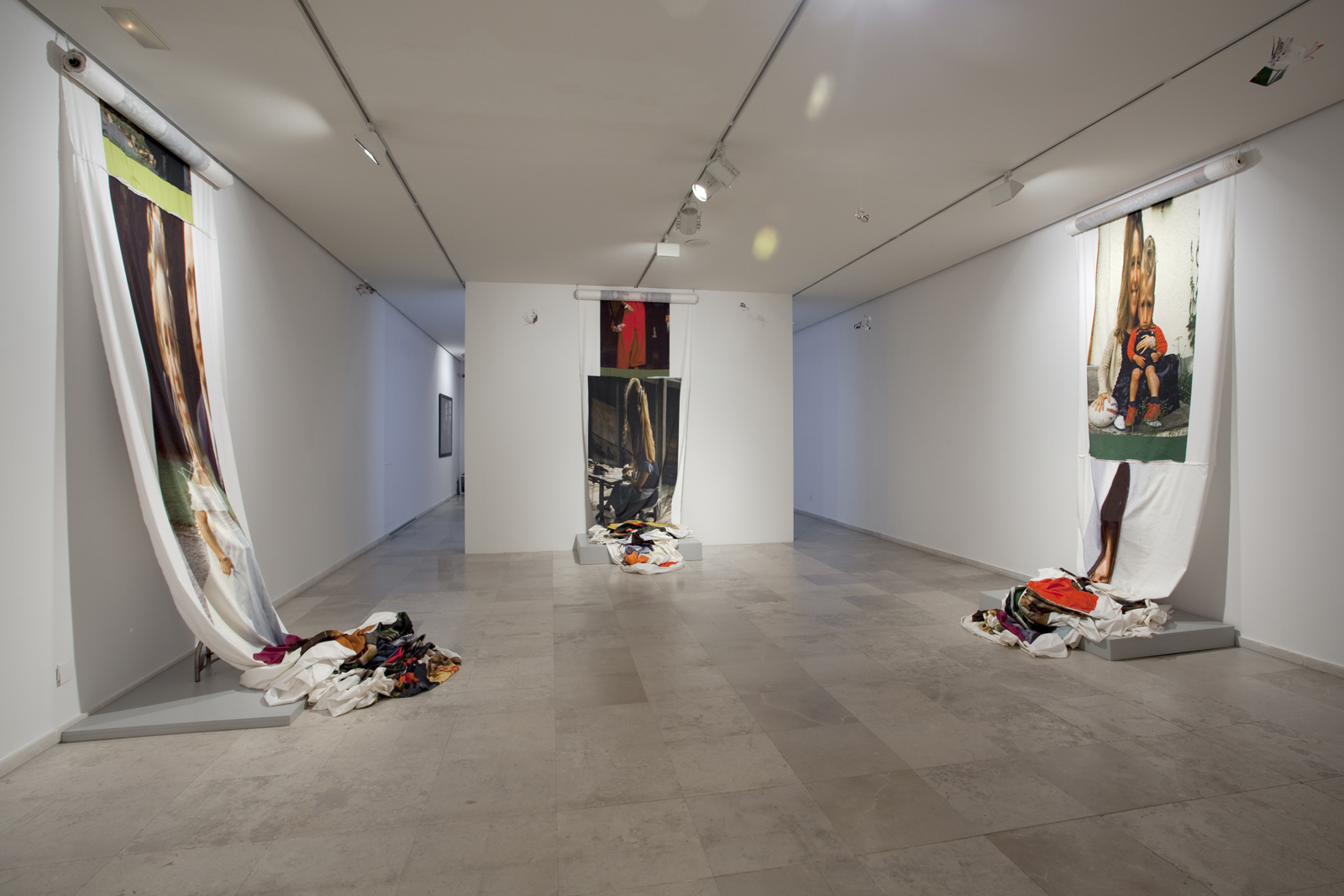 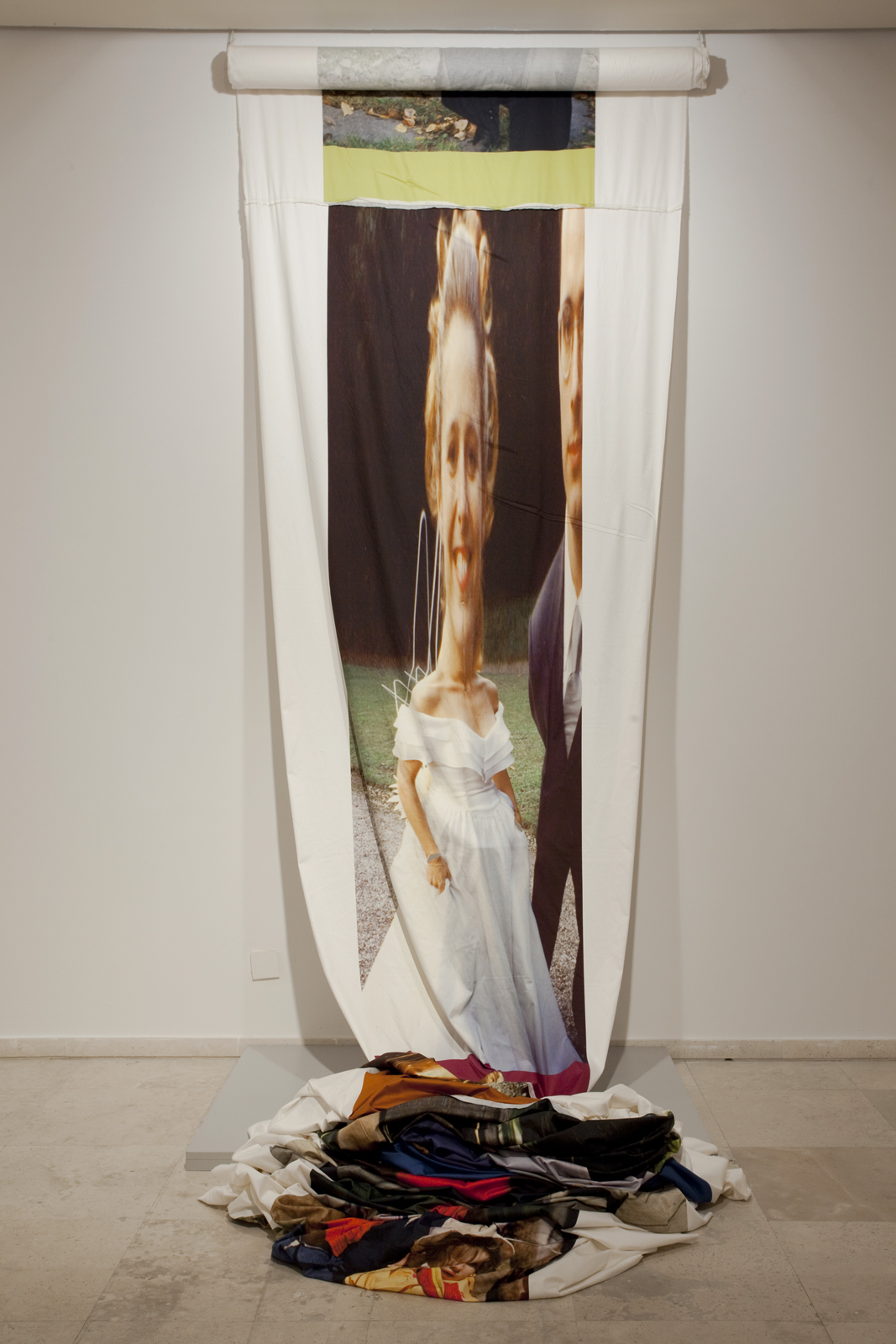 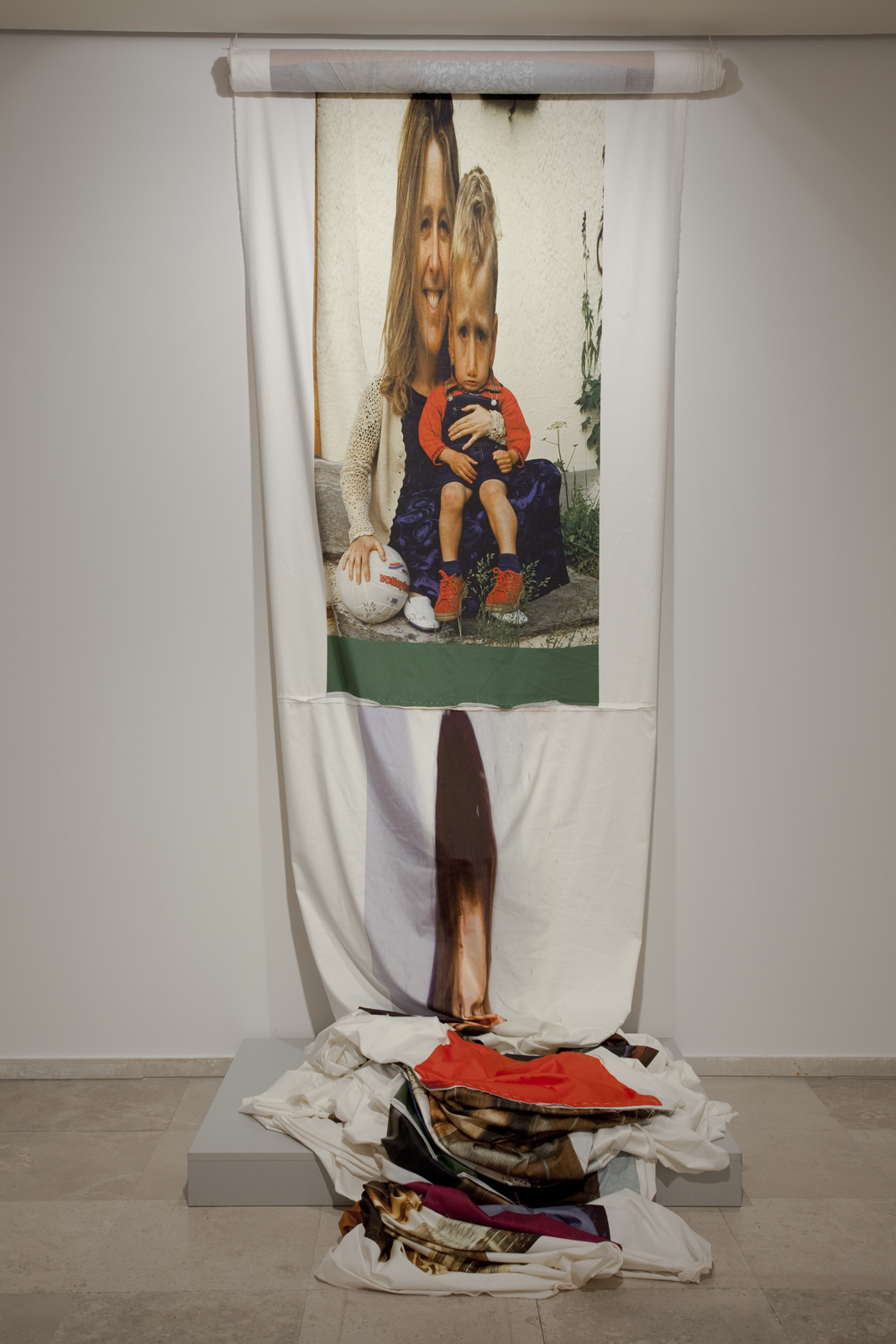 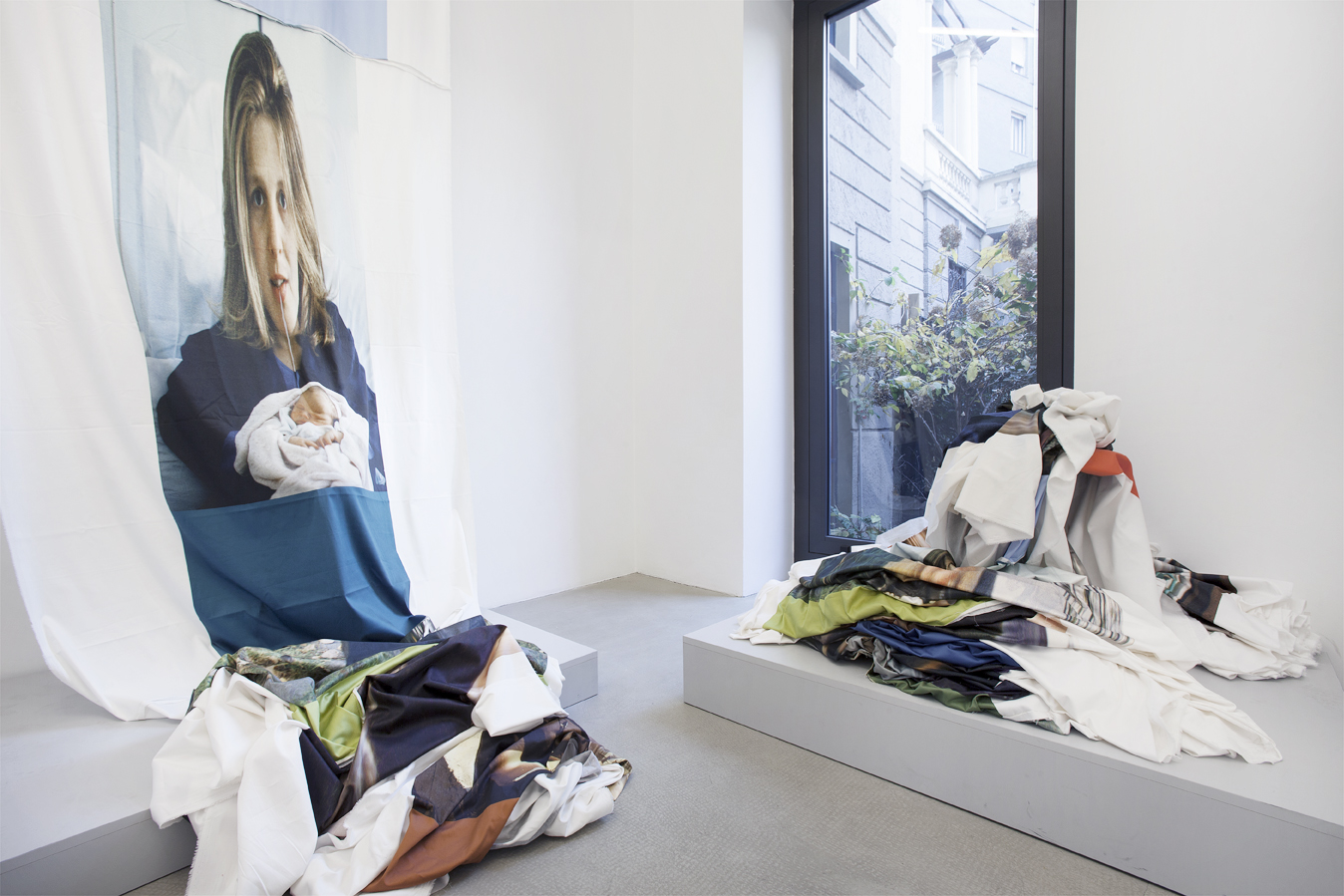 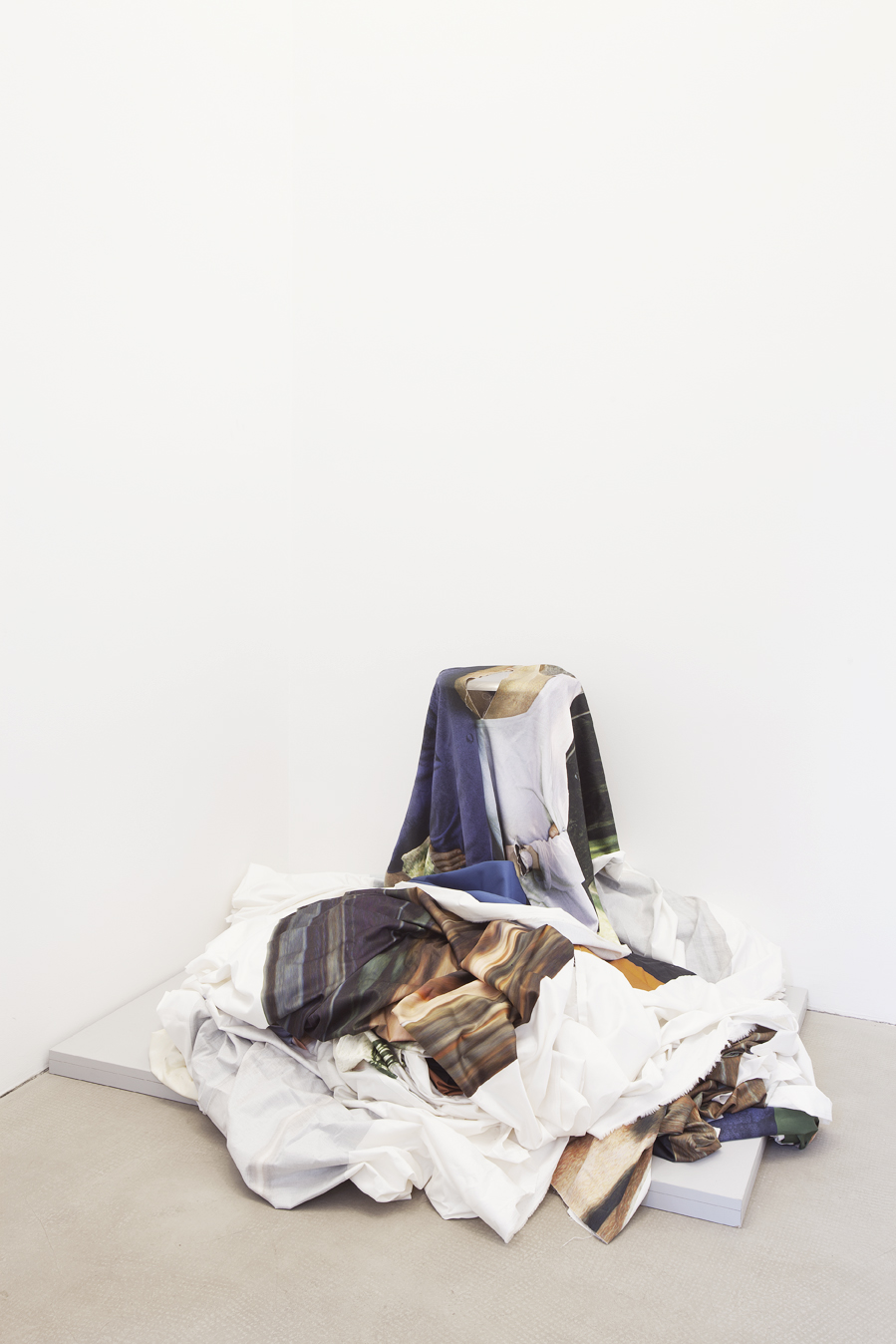 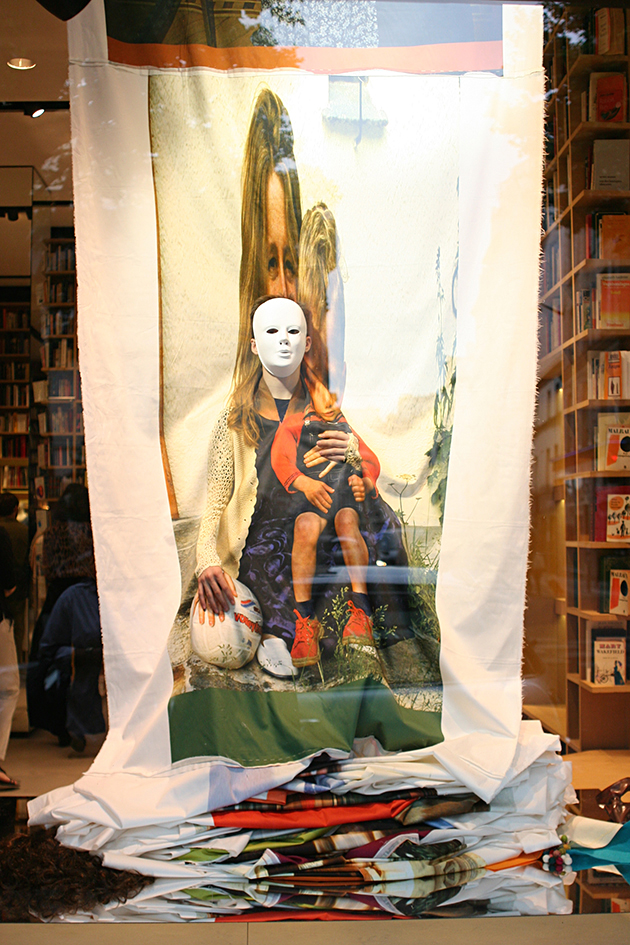 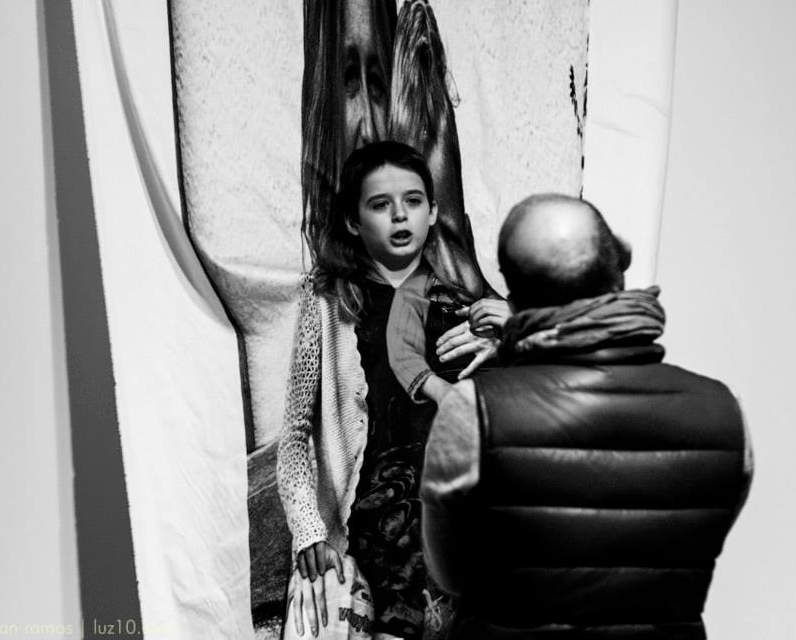 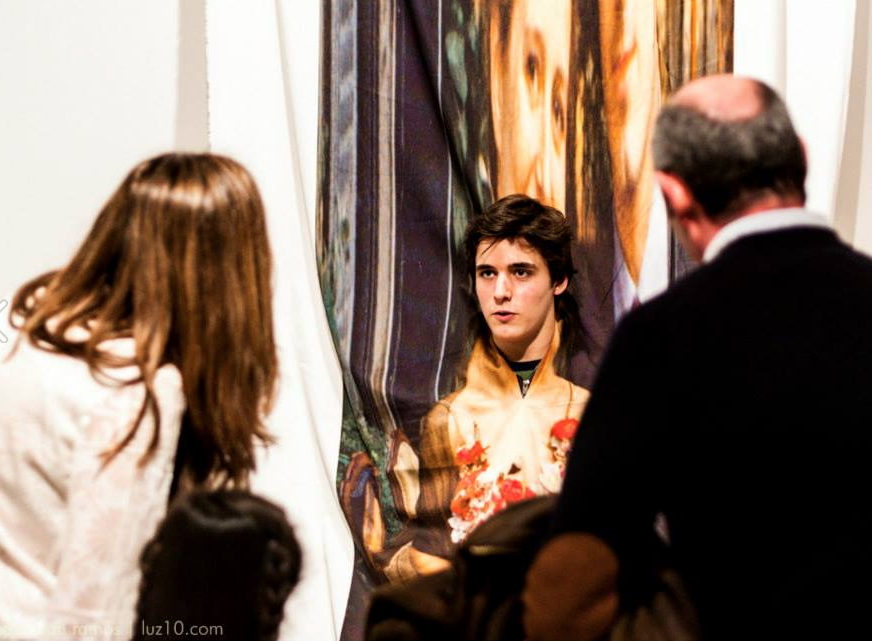 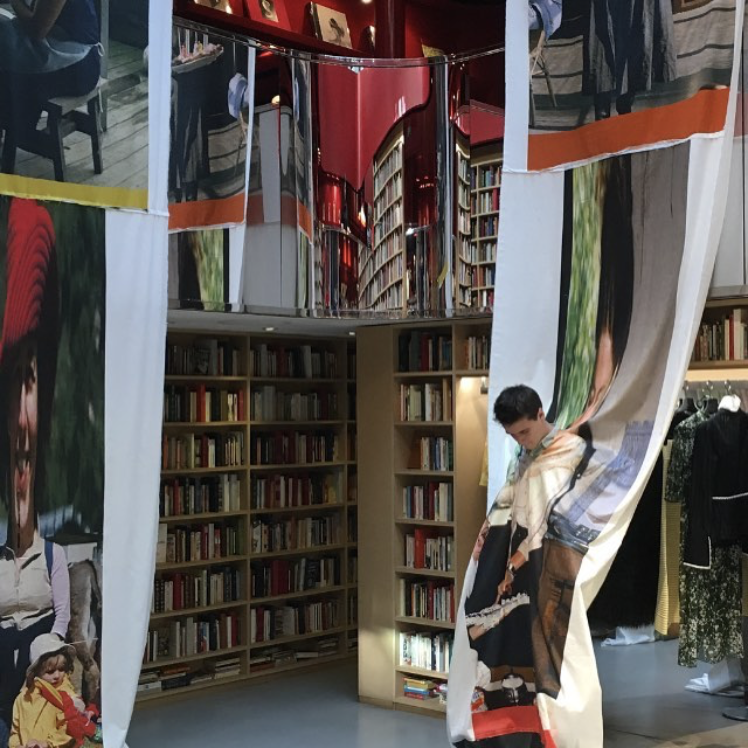 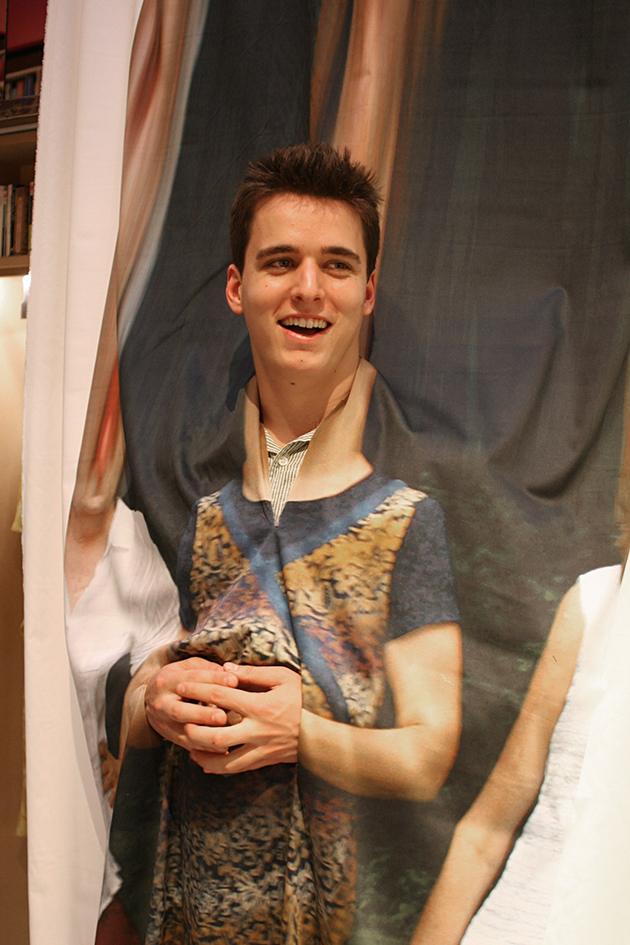 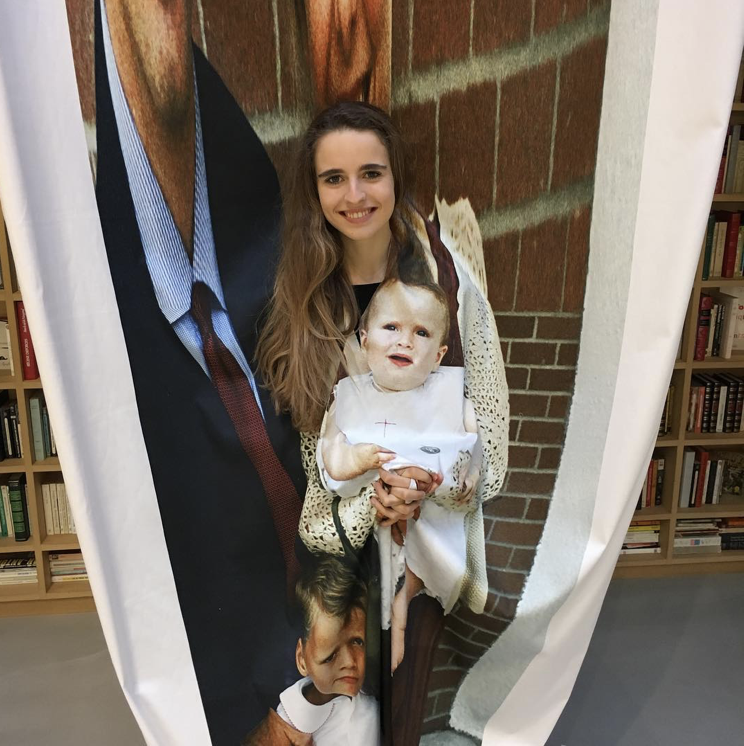 A performance carried out by my three children in 2012 (Galleria Kaufmann Repetto), 2014 (Museo del Patio Herreriano), and 2017 (Parcours Saint Germain) that explores empathy, the performative aspect of family albums, and the contingency of historical narrative. As a mother who has sought to understand my own children's feelings, needs, and desires, I also attempt, in this work, to reverse this dynamic by asking them to wear my body and try to be me.

I assembled my personal archive of photographs taken of me and had them printed on rolls of cotton, thanks to the generous sponsorship of Miroglio Textile in Italy. I asked my children to wear the photographs and perform me, speaking to visitors as me, answering questions about my work, about the photographs. Many of the photos were taken before they were born, so answering them required feats of imagination, interpretation, and conjecture. In a way, they were rewriting my history.

The performance script asked that the children occasionally interrupt their conversations and ask one another what to make for dinner. The three Maggies would discuss it and decide on making leek soup--a direct reference to Marguerite Duras-- before resuming their interaction.

Marguerite Duras: "One can feel like doing nothing, and then there's that, that soup in particular: between those two desires, the margin is very narrow, and it is always the same margin: suicide."

The exhibition title, Doing Life, points to the conceptual underpinnings of Cardelus’s work, work in which her everyday experience as woman, artist, and mother, give origin to an ongoing investigation that probes the dynamics of these shifting roles within the social fabric in which it is immersed.

The use of photographs, in particular family snapshots, takes Cardelus into territory that is both profoundly individual and universally shared. Snapshots are part of rituals that have become familiar to all cultures, and are vehicles by which a family nucleus constructs it’s own micro-history, and, as Diane Arbus wrote, constitute, “..a secret of a secret…,” a sort of idealized self portrait.

The use of such reactive material on the part of the artist, is to reclaim that which Allan Kaprow defined as art at the service of life. In Maggie Cardelus’s work, the domestic/familial sphere, marginalized by the art-world, is placed powerfully at the center of her artistic thinking. Her personal world becomes the instrument through which to process our most common human fears and compulsions, like the passing of time, or our fear of loss or separation.

To materially manipulate family snapshots, is for Cardelus, an attempt to crystallize a flux or flow undergoing continuous change. In Doing Life, these opposing tensions echo through an ensemble of works that, together, pull towards the figure of the artist as a single, mutating, self-portrait.

The entire exhibition is organized around an invisible horizon line that cuts through the space at the height of Cardelus’s bellybutton, creating an esoteric landscape whose gravitational force is the the artist’s subjectivity.

In the two large spaces of the gallery, hang two halves of a split, back-lit, enlarged snapshot taken of the artist. One half is meticulously cut-out, while the other has been dissolved and transformed using domestic cleaning fluids like bleach, alcohol, and silver-polish. The tension between programmed order and loss of control recurs in all the work in the exhibition, and is set on stage with the performance D/Innertime, in which Maggie Cardelus’s three children, literally dressed un in their mother’s body, impersonate her and respond to spectators. In this work, as in all the work, for every centripetal and self-referential move, there is a corresponding centrifugal one, in which the artist’s ego dissolves into a potentially infinite number of representations.

The theme of artistic creation, in this context, merges with creation understood as demiurgic, as creator of life. A ceramic sculpture, hanging from the ceiling, modeled by the repetitive squeezing of clay between thumb and index, embodies that duality between nature and culture: the artists’ thumbprints takes us to the very beginnings of human control over matter, matter both organic and out of control.

The very title of the exhibition is nuanced: Doing Life refers to both the artistic act, the generation of life, and to a narrative, more or less mystified, of her own existence. At the same time, it is also an attempt to appropriate reality, include everyone and everything within one’s own small universe.